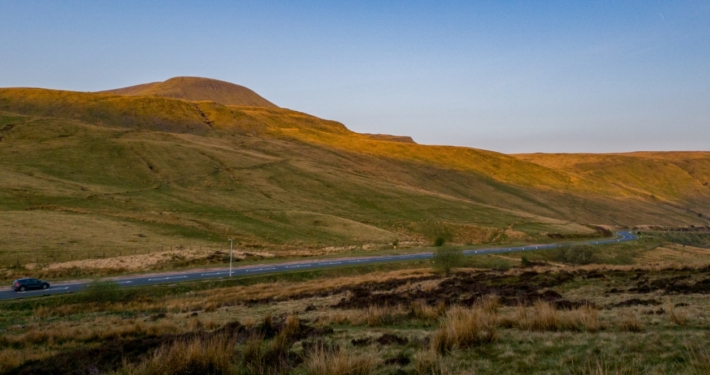 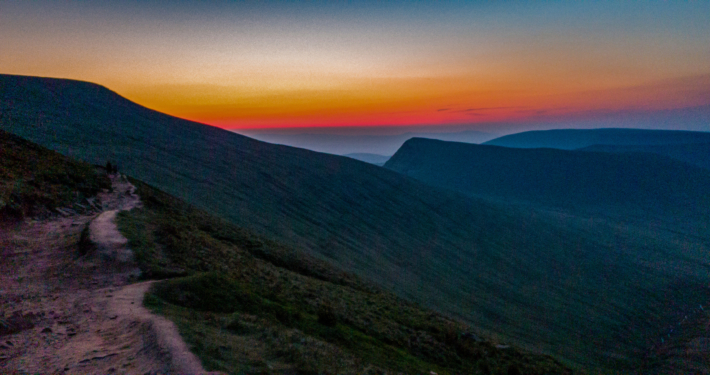 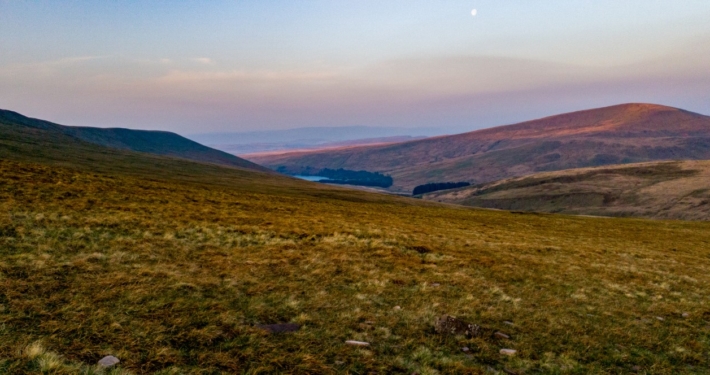 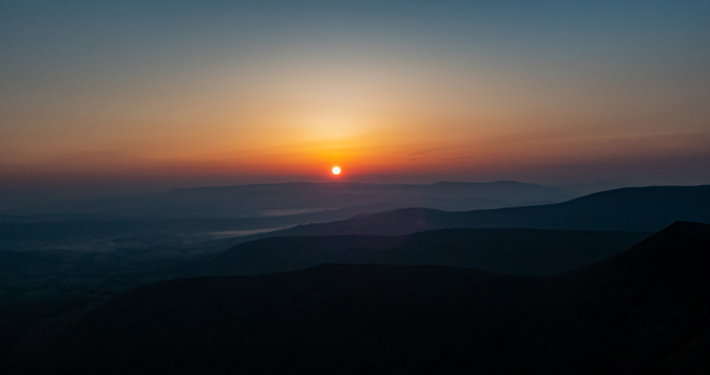 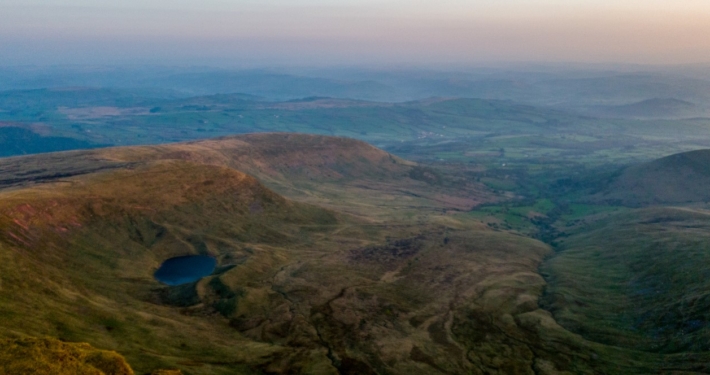 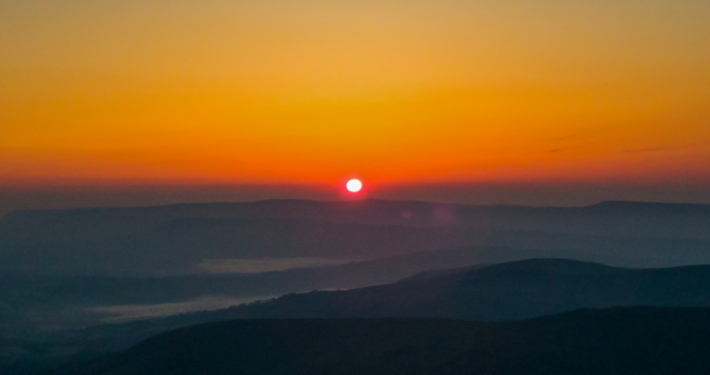 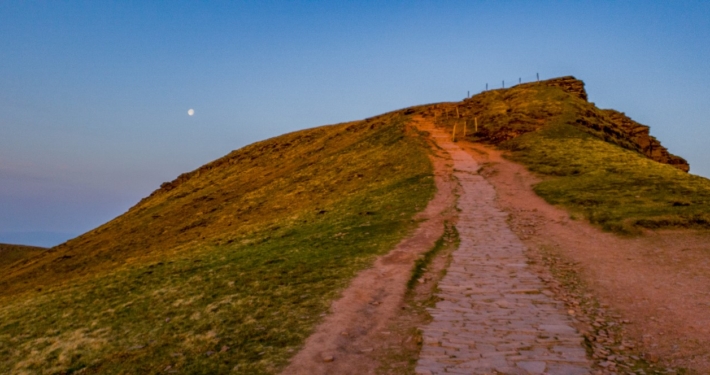 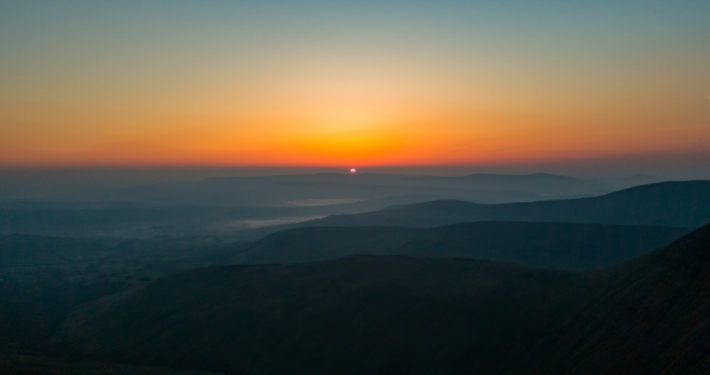 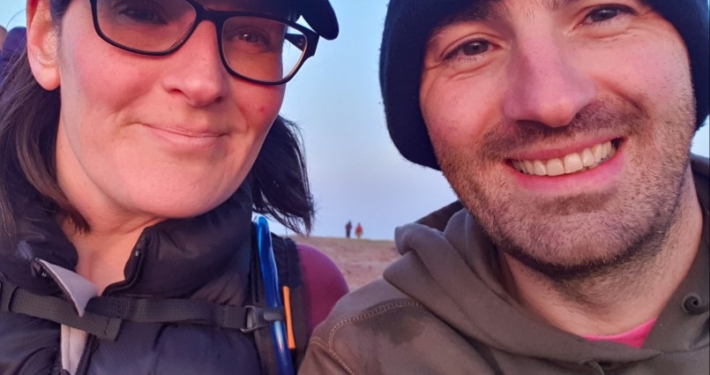 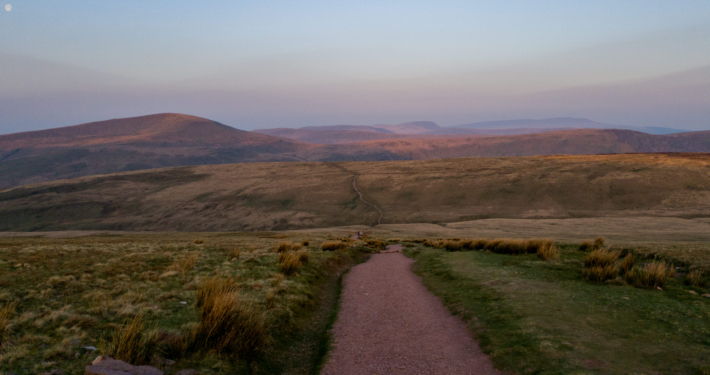 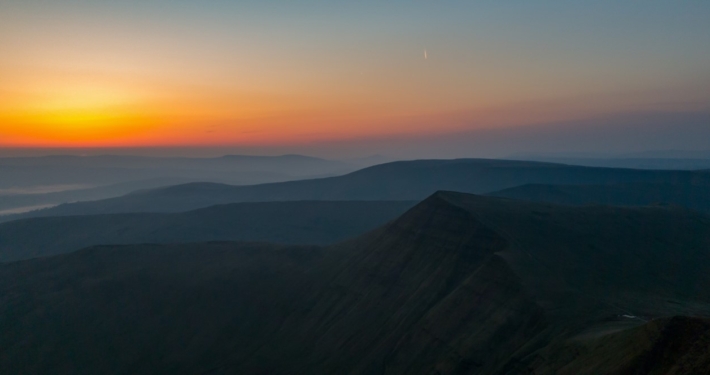 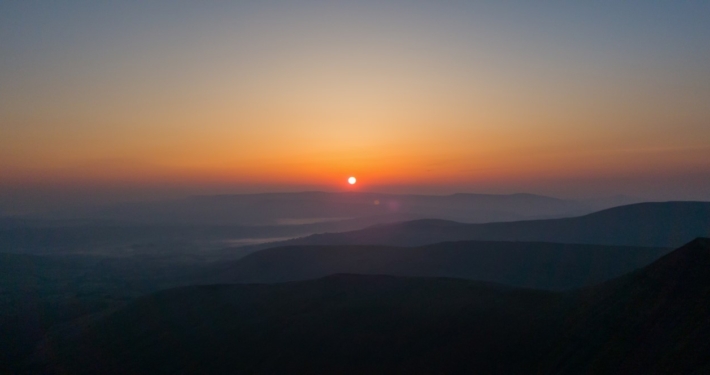 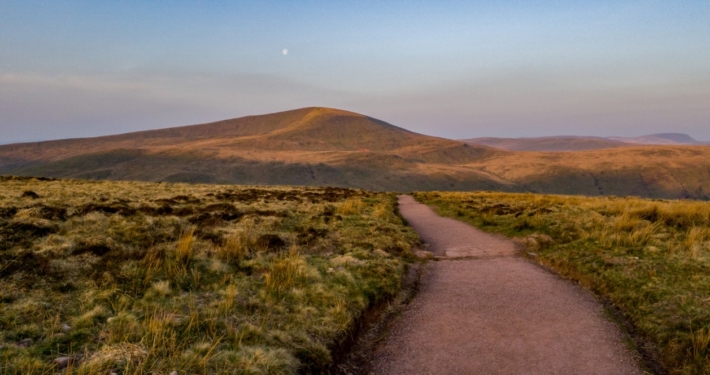 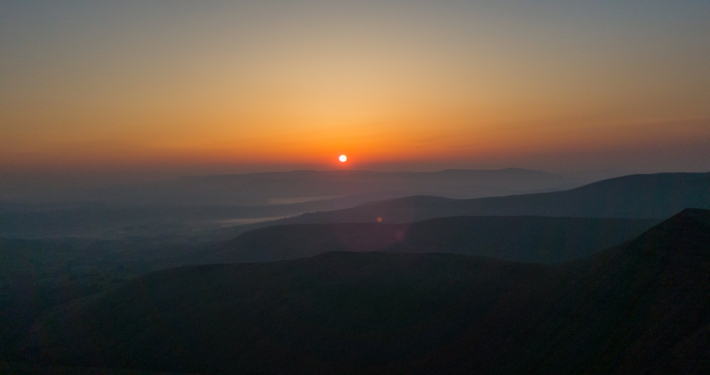 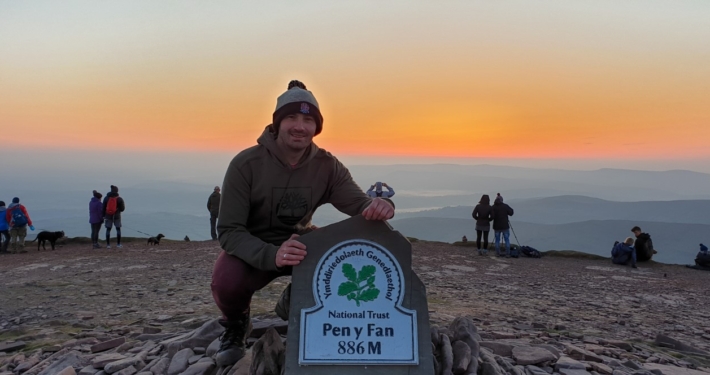 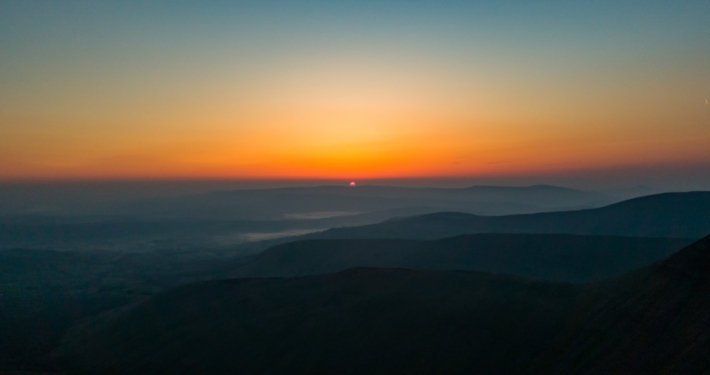 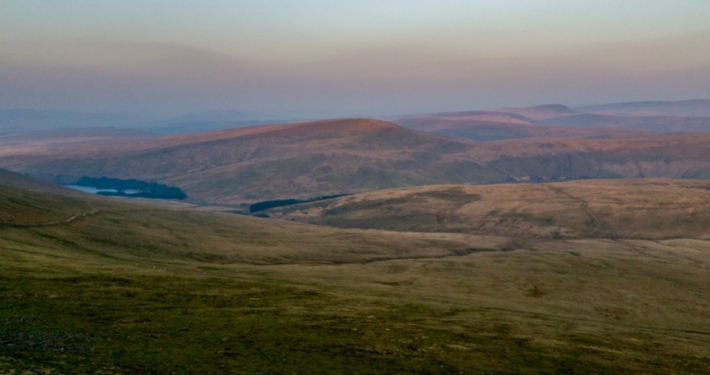 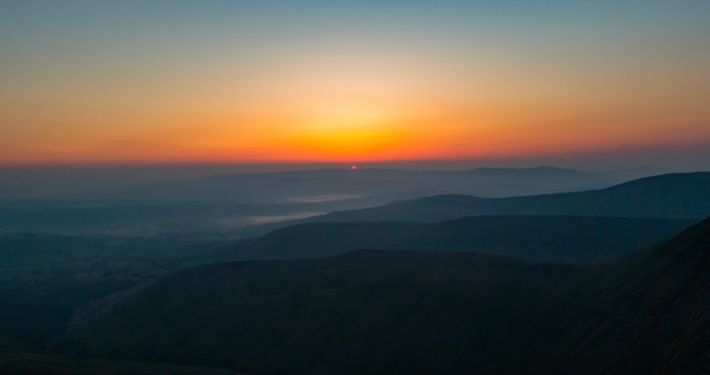 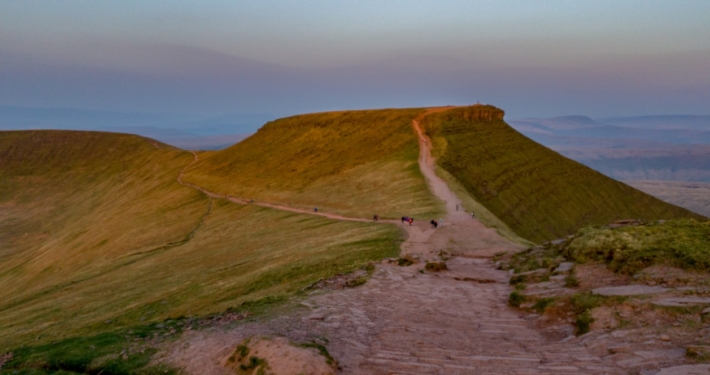 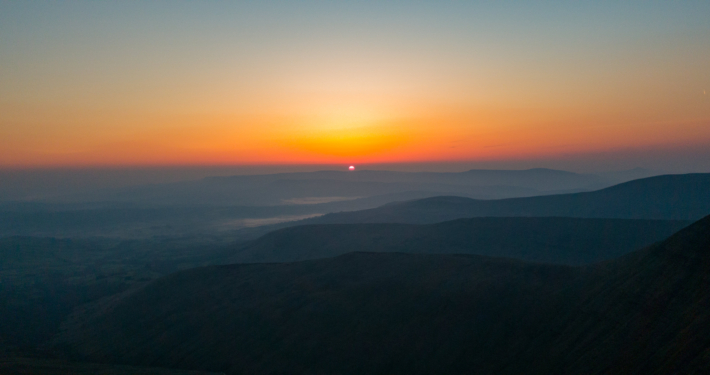 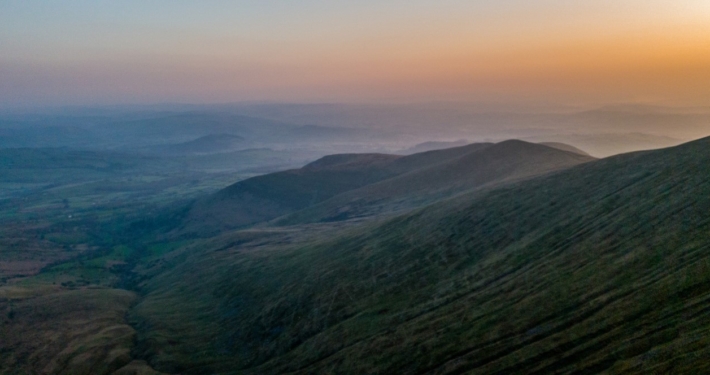 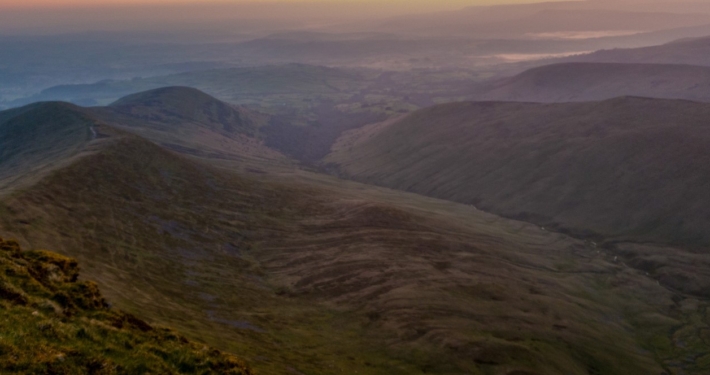 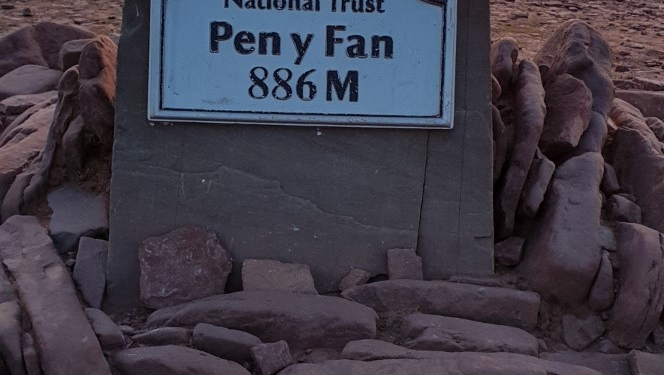 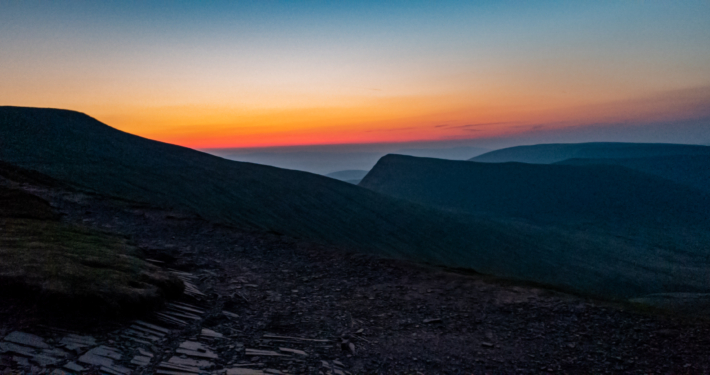 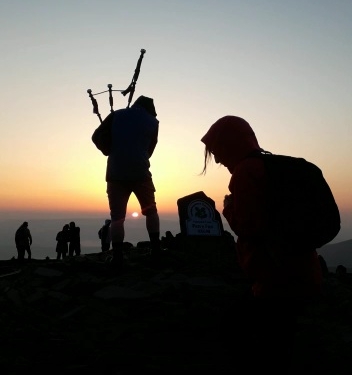 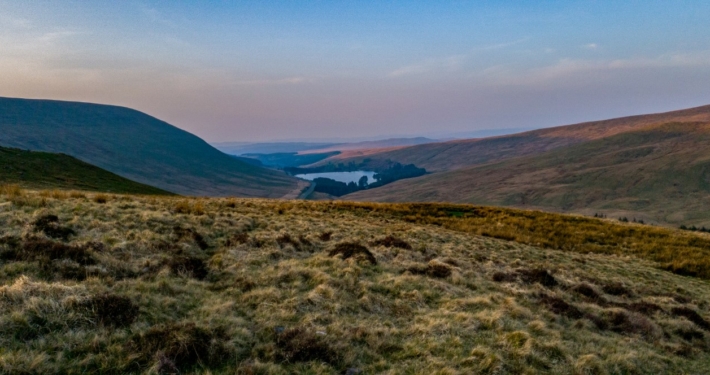 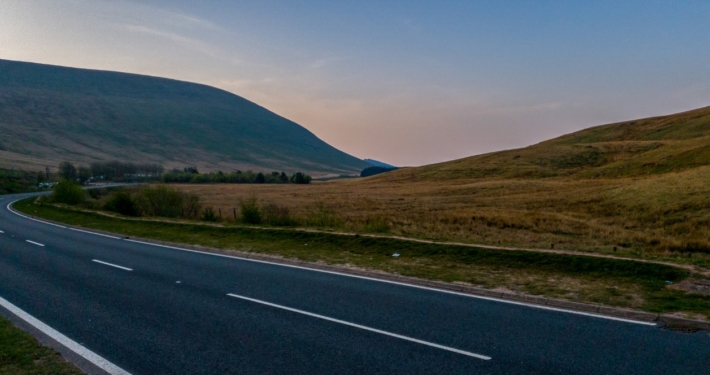 Admittedly, I don’t photograph many sunrises, but the few I have caught have been pretty amazing. The best, without a doubt was watching the sunrise from the top of Pen y Fan in the Brecon Beacons.

A sunrise is just a sunset in reverse…but at the start of the day!

The missus and I left home at around 4am. The first stage of the expedition was the drive to the Pont ar Daf car park and ‘base camp’. This alone was no mean feat as the M4/A470 combination amounts to a staggering 65 km. It may not sound much, but let me put that into perspective: that is equal to  6.5 x 10¹³ nm which can also be expressed as 65000000000000 nm. I think you’ll agree that’s a lot of zeros. Point well made.

Once there, we checked over our climbing gear, breathing apparatus, emergency kit and food rations. We had to take every precaution and even talked about the possibility of an avalanche, rock fall or polar bear attack. It may have been a mild Spring morning with no visible snow or ice and the closest wild polar bear at least 1600 km away in the Arctic Circle, but why would anyone take a chance like that? Besides, what if a polar bear escaped from London Zoo and somehow made it to Paddington Station? They’d be a couple of hours from Cardiff and then a short bus ride to Brecon Beacons and if they were feeling flash, they’d Uber it from Cardiff Central. It wouldn’t be the first time a bear had made it to Paddington Station. There was even a sequel ffs. Sneaky fuckers! Especially the ones from Peru.

Who would we leave the kids to if something like that happened? Much debate was had until we finally agreed that we couldn’t inflict that kinda shit on anyone else. It seemed most logical to give joint parental responsibility to Xbox and WiFi.

With the legalities dealt with, we commenced the climb.  We roped up and started the arduous task of putting one foot in front of the other up the mountain which had an average incline of around 13%. I feel the need for some context here. According to Wikipedia and flat-earthers, a 13% climb puts Pen y Fan on equal footing with Mount Everest. This is what we were facing. This was our, erm, Everest.

What felt like weeks passed. We had no idea if it was day or night, and had to set up our tent at a moment’s notice due to the unpredictability of the weather. It was touch and go for a while and we had no other choice than to strip naked and cwtch for warmth.

Operation: Back to reality…

Amazingly, we made it to the summit about 40 minutes after leaving the car. It’s amazing how the altitude affects one’s concept of time.

*OK, so some bits may not be true, but it was ridiculously too early to be walking up a mountain. Besides the dramas above that mostly didn’t happen, the only adversities we faced were dragging ourselves out of bed, but we survived and I took some lovely photos that still didn’t do the sunrise justice.

Pen y Fan is an easy hike…I could probably hop to the top on one leg whilst blindfolded, but it was absolutely magical that morning. Watching the sunrise from the summit with low mist and clouds covering the nearby peaks is something I’ll never forget. If you looked up the word ‘tranquil’ in the dictionary, it would describe that moment…

Then some arsehole started to play the bagpipes! I shit you not. I’m not against the sound of the bagpipes and appreciate the cultural importance they have to Scotland, but if I wanted to hear that kinda noise at that time of the day, I’d try to hoover Marmite when he’s asleep.

Still, some stunning photos so it was totally worth it 👌

Note to self: hoover Marmite! 😁 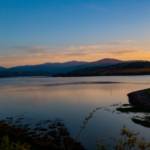 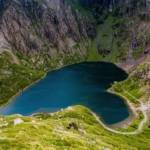