First up is my latest, and final mix. I recorded 20:20 Vision in early September 2020 and it has an autobiographical feel to it. It features tracks spanning several decades, as well as genres of music that have strong connections with personal experiences over the years.

Time for some background info…

A decade had passed between Expressions and 20:20 Vision. Although I compiled several mixes in between, some weren’t recorded and others were lost when a hard disk failed.

More recent events, such as my cycling accident motivated me to make one final mix. The ultimate mix, but one that also tells a story.

Quite a lot of planning and preparation went into 20:20 Vision. Hundreds of potential tunes for the mix were earmarked, but due to the obvious time constraints, I couldn’t use them all.

I had to consider the key of a song and whether it would mix harmoniously with other songs I wanted to use. Plus another important consideration was what that song meant to me on a personal level and what memories it evoked for me.

Some keys when mixed together sound better than others. This is due to the harmonic relationship some keys have with each other. Take for example a song recorded with the dominant key of G Minor. When mixing with another song, it will sound best when transitioning to, or from a song in C Minor, D Minor or B-flat Major of similar tempo.

Next comes pitch. Speeding up, or slowing down a track so that it can beat match with another can effect the key depending on how drastic a change is made.

This in itself presented a challenge with the mix as some transitions required a drastic shift of BPM to accommodate the change. For example, the mix from Fade’s Remix of Delerium’s Silence which is in A Minor when played at it’s standard tempo of 130 BPM into Chicane’s No Ordinary Morning which is dominant to A Major at 102 BPM.

For instances such as this, simply turning off the power to a deck has an amazing effect of slowing things down in order to bring in the next track and it still feeling like the mix is flowing.

I had 3 pages of A4 paper covered in shorthand notes at hand when I recorded 20:20 Vision. Every transition, effect, adjustment and chop between tracks was accounted for and I am pretty pleased with the end result. This in itself feels good, as I’ve struggled with confidence when completing and submitting uni assignments since my crash. I score well, but constantly question my work and completing the work takes so much longer now. Yet here I am, content with something I’ve created from scratch and it feels good. I just need transfer the same confidence to my studies.

Not a random Blackadder reference, but a nod to the Vengaboys. I still can’t get over them producing a tracks as beautiful as Paradise…

Paul Oakenfold played it on his Essential Mix World Tour set from The Rojam in Shanghai in 1999. The track was listed as ‘unknown’ at the time and over the coming days and weeks, trance forums were buzzing to try to ID it. Then came the suggestion it was a Vengaboys track. I plucked up the courage to visit HMV in Kingston-upon-Thames and asked the sale assistant if I could listed to The Party Album. Lo and behold, track number 12 was indeed the same track played by Oakey. Once over the initial shock, I asked the sales assistance to listen to it (pre-social distancing times) and tell me if she thought it was a Vengaboys track and she was pleasantly surprised. I had always associated the Vengaboys with cheesy, Eurodance style pop and never imagined I would buy one of their tracks, let alone listen to it frequently for more than 20 years!

So, just like with books, you can’t always judge music by the name of the artist.

The tracks on this mix span several decades of memories, but each time I listen to it, the songs and lyrics don’t sound out of place or time. There really is something absolutely timeless about how one perceives music.

The final mix is just over 8 hours long (see update below). This may seem extreme and maybe it is for some, but for me, this mix is perfect to listen to on long bike rides, drives and more recently to listen to when studying.

Listening to music whilst studying before my crash was a massive no-no, but it turns out that listening to music, albeit very quietly through closed-back headphones cuts out noises that would otherwise cause a distraction for me.

So, if you have suffered a mild traumatic brain injury with ongoing post-concussion syndrome issues, just cue this mix up, whack some headphones on and welcome to the world of being able to sustain attention*

*Not guaranteed. Results may vary…but this mix is the dog’s bollocks**

You can either listen to the mix via the player below, or you can use the direct link to download to your computer: 20:20 Vision (right-click and select to save as if it loads in an embedded player).

I have created a cue file for anyone wanting to be able to skip forwards or backwards between individual tracks using a media player with .cue support.

It is almost a year since I finished 20:20 Vision and as much as I still love the mix, the omission of several key tracks has always been an afterthought. More so as this mix was a reflection on memories and experiences, so leaving out songs that have helped to connect such strong emotional meanings for those felt like listening to an incomplete story.

Take the diatonic harmonies from the theme tune to Forrest Gump for example. I used to play this iconic and beautiful piece of orchestral music to my children when they were in utero and the effect it had on them as babies was amazing. It only took a few bars of listening to the soothing piano and violin tones and they’d be fast asleep! They have both gone on to develop their own tastes in music, but they still appreciate hearing that lush melody. However, it no longer has the same sleep-inducing effect on their circadian rhythm!

20:20 Vision has been digitally remastered! It has taken a couple of months to complete the process and I also took the opportunity to make an addition to the tracklisting. The added track was originally composed over 300 years ago by Johann Pachelbel and is one of my favorite songs. The 8 chords from this timeless Baroque classic are not only synonymous with weddings, but they also form the backbone to many pop, rap, R&B, rock and a seemingly endless list of genres in between. The song is Canon in D and the only reason it was omitted when 20:20 Vision was originally mixed in 2020 was that I couldn’t decide what version to use. There are hundreds of different arrangements of those 8 chords, plus just as many variations put together for various lead instruments and I like so many of them! It was just by chance that I was listening to the Jean-Francois Paillard’s Chamber Orchestra version when I was mastering the soundtracks section of the mix, so I decided to add it.

The mastering process itself was made even more demanding by my decision to try sourcing lossless copies of all the tracks used in the mix. However, this was not possible as some tracks on 20:20 Vision were limited to white label or promos on vinyl. In these cases, I had to use vinyl rips which is far from ideal due to analogue to digital conversions being very difficult to mix with digital tracks. The source for one track was a 192 kbps MP3 file with an inconsistent tempo which I fixed by editing the opening 17 bars. The track also had an average loudness of just -22 LUFS which is incredibly quiet in terms of music and required filters to not only boost the sound, but also to control any errant peaks. One track was a YouTube to MP3 conversion due to not being released commercially!

EQ8 filters have removed some high and low frequencies and glue compression, multi-band dynamics, and saturation have been tweaked as well as an overall boost from a limiter. It’s not perfect, but then again I’m not an audio engineer. Plus, this was my first and last attempt at mastering and I’m happy with it, so zero fucks given.

Mastering the mix has kept me busy whilst recovering from a broken ankle, as well as damaged ligaments in both ankles . 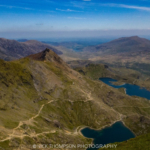